Congratulations to Lyric Opera Melbourne for their recent successful performances of Our Man in Havana at the Atheneum, Melbourne.
Were just finishing post production of the vision captured as part of the Melbourne Fringe Festival’s performance.  ABC Classic FM recorded the performances and will be putting to air later this year for all those Opera fans who couldn’t make one of the live performances.  Great reviews by all the major news organisations received.

Lyric Opera of Melbourne is proud to presnt the first Australian production of Malcolm Williamson’s black comedy / spy thriller ‘Our Man in Havana’.

Based in the Graham Greene novel and the film staring Alec Guiness, Havana is a mastpiece  of music and theatre by one of Australia’s greatest and most neglected composers.
Lyric are transforming the Comedy Club on Collins St into a seedy Cuban den of cocktails and crooners. With a top shelf cast and creative team, Havana will be the unmissable event of the year. 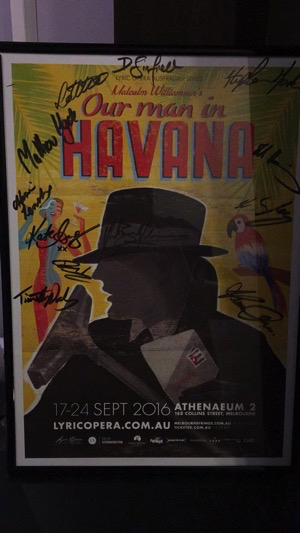